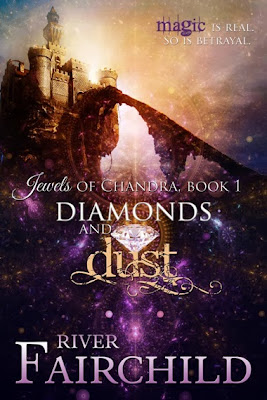 Two heirs. A Kingdom of dust on a troubled world. One might resurrect it. One might destroy it all.

Archaeologist David Alexander investigates the cave where his father disappeared and hurtles into another world, one filled with magic and bizarre creatures. The mad ravings in his father's journals of icemen and dragons may not be fantasies after all.

Convinced his father may still be alive, David begins a treacherous journey to find him and discover a way home. Along the way, he encounters a few unlikely friends. A Dreean warrior, a beautiful thief and a satyr join him as he searches.

David's arrival into this new world sets off an explosive chain reaction of events. Faced with powerful adversaries and few clues, he may not get the chance to rescue his father before disaster strikes, condemning both of them to death. Or worse.

You can pre-order Diamonds and Dust on iTunes / Kobo / Nook.

***December's Bookworm News will be on the third Monday of the month due to holiday vacations.***
Posted by Cherie Reich at 8:00 AM

Thanks for reminding me! I need to pick up the Lincoln and Child book. Came out while I was on vacation.

Yes, River's cover is totally gorg! I've seen it everywhere. Congrats to her.

Thank you for showing off my beautiful cover!

Love the cover of River's book. Congrats to her.

Awesome cover! I have Doctor Sleep now. I just have to read two other books first before I can allow myself to pick it up!

Gotta read Fiddlehead by Cherie Priest! I really like her stories.

That cover is most definitely gorgeous! Also, go you for reviewing so many books! Reviews can be so time-consuming to write, so I'm impressed...

What a beautiful cover for River. Some great new releases!

Yeah, I like that cover! Castles are always the best. :)

Love River's cover. It's beautiful. And love all your book love too!

The Diamonds and Dust cover is beautiful and sounds a great read!

You read 2 books in a week? I'm lucky if I finish 2 in a month. And your number of reviews is great too. I'm feeling pretty snail-y now. :(

Lots of new releases.
The book cover is beautiful!
5 book reviews - is a reminder that I need to finish some outstanding book reviews...
Writer In Transit

That cover is beautiful.

Thanks for sharing your book news with us.