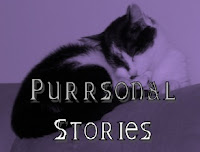 In August 2006 two things happened that changed my life.

That month, my dad broke his back and was in the hospital for ten days. When it first happened, we weren't very certain what the damage was. Would he walk? Be in a lot of pain? Etc. Thankfully, he had a wonderful neurosurgeon, was in little pain during the entire time, and he was able to be back to normal. But that incident really hit hard that my dad won't always be around. It's something I keep in the back of my mind quite often, even though he's in pretty decent health--despite his bad eyesight.

The other event was a good one, though. The same week he was in the hospital, one of our barn cats showed up with five adorable kittens, who were around four weeks old. They were needed in a time of uncertainty. We eventually sent the mom and four of the kittens to the SPCA, but we kept one. My beautiful Cinderella kitty. "Relli" for short, and the cat in my Purrsonal Stories picture.

Relli is unlike any cat I've ever had the pleasure of owning me. If you say "up," she'll go up on her hind legs and rub against your hand.  In her ol' age of seven, she has finally calmed down and gotten rid of some of her neurotic behavior. It just took her over five years to tolerate my sister! Yet, if I go down into the basement or outside, she'll cry at the door until I return. She sleeps on my hip at night at lot of the time. If she's cold, she'll burrow under the covers and sleep against my back or stomach. She'd rather pet you than have you pet her. And for some reason, she thinks we keep guests in the basement. She doesn't like it when we let them out. We don't really know her birthday, but we claim it to be July 4th.

And shh, don't tell the other furbabies I have that Relli's my favorite.

Do you remember what you were doing seven years ago? Do you have a favorite furbaby?
Posted by Cherie Reich at 8:00 AM

I've got a kitten called Misty, and she's definitely my favourite. She's almost 6 months now; they grow up so fast!

I have the shredder chihuahua dog called Niobe. 8 years old and has claimed war on cats since she was a puppy and one used to bully her.

I completely identify with the fear of your parents not always being around. I hate seeing my parents getting older. It's terrifying, to be honest.

I'm glad Cinderella seems to be getting over some of her neuroticism as she gets older -- hopefully my cat Bodhi will do the same!

My parents are getting up in age so I think about that a lot. Glad your father had a full recovery.
Sounds like you have a furry friend for life now.

Relli sounds so cute. I love cats but my husband is allergic to them. I have a sweet puppy, Ellie Mae, who I love. She's my first dog.

It's just my mom and me and she's in her 80's so I think about her getting up in age for sure.

Awww I loved reading about Relli's story! And I'm glad your dad got better. That's really scary. Thanks for sharing these personal stories with us!

We won't tell any other cats that Relli's your favorite! :) I'm happy your father got better too.

Hmmm, seven years ago, it was a rough year for us too. Keith's granny passed on and he was named executor of her estate. No one other than me was there to help him sort through a house with things hoarded floor to ceiling.

Relli is such a cute kitty. I really love critters.


7 years ago - hmmmm I started a new job. My dad had back to back heart attacks. He went on to live for another four years. It was pneumonia that eventually got him. I discovered NaNo.

I love cats! That nickname for Cinderella is really cute. Never thought of it before.

7 years ago is a year I remember well, but am glad it's over. I wasn't in a very happy place in my life back then. Not that my life is so great now, but still.....

The cats are cute! I never got to have a pet cat due to my dad's allergies and apartments not being pet friendly.

She sounds like a cutie. We've always had cats and I can't imagine a house without fur. (Or a keyboard.)

Seven years ago, Rocko and Spunky had been with us 9 months and we'd just lost Hobbes. (Calvin had died the year before and we estimated Rocko and Spunky were born about that time. Our sweet Calvin died a positive and came back as two little negative goobers. LOL)

This time seven years ago I was getting ready to start 8th grade. My goodness that's weird to think...

I LOVE my cat. He definitely owns me :)

Seven years ago, I quit trying to be a novelist. I was pretty fed up and burned out. I had been blogging for a year and decided to throw my creative self into that and podcasting.

She's a gorgeous girl :) I've got 2 kitties, a boy and a girl. The girl I kept after fostering her & her five babies. Actually, my boy cat looks a bit like your Juliette over there to the left :) BTW, love your cat names :)

Awe she's beautiful! I used to have a sweet fur baby, but she vanished a few months ago and I don't have the heart to get another one yet.

Aww, Relli is a doll. I can imagine how frightening it was when your father was hurt that severely. So glad he made a full recovery.

Aww, Reli is so cute. Thank you for sharing the sweet story, Cherie.

I remember seven years ago for sure. That was the year I was a freshman in college and made some amazing lifelong friends.

I do also have a wonderful Furbaby. His name is Benny and he's a goofball. He actually has a couple youtube videos, and I've considered writing children's books based on him :) http://www.google.com/#bav=on.2,or.r_qf.&fp=e2e51edbcbf5c046&q=benny+the+special+kitty

Seven years ago I started teaching Lit at the art college here. It brought me back to myself as an artist in my twenties, and helped me bridge the art/writing thing. Fave pet? Well, I had a tiger cat named Carl for twenty years! He was very wise and seemed almost human. I have his ashes in a tiny urn in my living room. Yeah, I know, weird!

I feel the same way about my father. He turned 70 last month, and don't have enough days left with him for sure. So I try to make the most of the ones I do get. :)