This year's A to Z Challenge theme is: All About Foxwick, but first, I would like to thank the A-Z hosts, particularly Arlee Bird. Without him, we wouldn't be having this crazy fun in April. Thank you, Arlee!

Last A to Z Challenge, I'm embarked on an adventure in the magical Kingdom of Foxwick and its surrounding neighbors. Each day of the challenge, I had a flash fiction piece ready to share this fantasy world with you. At the end, I decided to self-publish the collection, but A to Z Flashes of Foxwick is just the beginning. Foxwick is such a fascinating place, though, and I have more stories to come, so this month you'll hear about these forthcoming stories, be the first to see excerpts from it, and hear about the magical creatures and people from Foxwick and their surrounding lands. 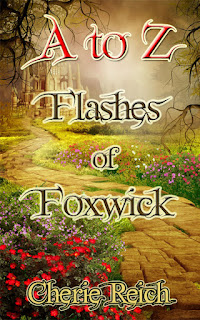 In honor of the A to Z Blogging Challenge, A to Z Flashes of Foxwick​ gives a glimpse to the characters, magical creatures, and lands in the fantasy world of the Kingdom of Foxwick.

A young dragon befriends a dragon seer. A phoenix bursts into flames in mid-flight. A man must choose between his simple life and one of fame. A queen will find her heart turned into ice and many more!

And now an excerpt from one of my favorite pieces in A to Z Flashes of Foxwick.

Bones littered the cave’s floor. Smoke trailed from the dragon’s nostrils and collected among the stalactites.

The dragon munched lazily upon a femur. Its tail swatted back and forth, sweeping the debris against the stone walls. Bats fluttered and escaped from its home. If the dragon hadn’t had a full belly, it would’ve snapped at the flying creatures. A metallic clang echoed. The dragon paused its chewing and listened.

Did the king send more men to die at its sharp claws and even sharper bite?

No, it’d knocked a knight’s helmet farther into the cave. For now, the dragon would feast and wait.
Posted by Cherie Reich at 8:00 AM

Email ThisBlogThis!Share to TwitterShare to FacebookShare to Pinterest
Labels: #atozchallenge, a, a to z flashes of foxwick, fantasy, flash fiction

Have you been watching me while I eat? hahaha. I love the theme! :)

Yes, I was thinking about Al as I read this!

A feasting dragon is a great way to kick off A-Z! :D

Love your theme and the short bit you shared. Sounds like a great story.

I enjoy doing Flash Fiction...even offer stories and picture prompts on my own blog every Friday. Good luck with the challenge! I participated last year and had a blast!

A2Z Flash Fiction? What a great idea! I look forward to your story.

Lovely description of a dragon feeding in its lair.

Yay, I love Foxwick! Looking forward to more great excerpts about it. And like others, I couldn't help but think of Father Dragon when reading this LOL.

I prefer my femurs on the side. :)

Hello, Cherie! I love your theme idea for the Challenge. Looking forward to reading more about Foxwick!

Happy A to Z-ing! from Laura Marcella @ Wavy Lines

Oooh, I love that snippet. Foxwick sounds very interesting indeed! I'll be back :)

You are just the coolest :D

A-Z Foxwick is awesome! Can't wait to learn more about it!

Sounds like a badass dragon. Look forward to reading more about Foxwick!

Congratulations on publishing your book. That's a very eye-catching cover.

Nice to have found like minded folk. Please visit and become a member at http://citymusecountrymuse2012.blogspot.com/ where we are posting an original poem every day during the A-Z challenge.

Aww, I love dragons! Wish there was more to this piece :-)

I really enjoyed your collection.

I do have this! I need to read it soon. Also it's perma-free on Amazon, so I'm wondering how you made it that way.

This was such a great idea for the A to Z last time :)

Wow! You have some amazing imagery in this excerpt. Thanks for sharing. :)

So cool! Just downloaded a copy of A to Z Flashes of Foxwick for my Kindle. :)

I love it! [Clicking over to Amazon to download A to Z Flashes of Foxwick]

I'm here with A to Z, and I look forward to following you all month.

Loved it! very cute. Glad I found you via the A-Z challenge. Always great to meet a fellow author.