Interview with Christine Rains, author of 1303 - The Dragonslayer 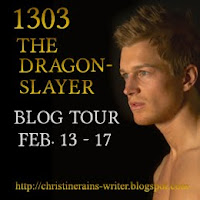 Today I have a very special guest on my blog today. Christine Rains is a geek mom and the author of the 13th Floor series. She's here to answer some questions and tell us more about her newest paranormal romance novella, 1303 - The Dragonslayer.

Cherie: Tell us a little bit about yourself.

Christine: I'm first a mother to an adorable and immensely clever two and a half year old. It's the hardest job in the world, but it's the best thing I've ever done deciding to be a parent and stay-at-home mom. I'm frequently lost to the worlds in my head, and if I manage to find some time, I write about them. Oh, I'm a wife to my best geek friend. I didn't forget you, hon! * waves at hubby *

Cherie: Hehe! Yes, you better not forget the hubby. Tell us about 1303 – The Dragonslayer.

Christine: I wanted to do a traditional fantasy tale in a modern day setting. Xan comes from a long line of dragonslayers, and while he's still an honorable warrior, he must fight his battles in secret. All this secrecy makes it seem like Xan is the bad guy, but that's to the advantage of the dragons. I've thrown in a feisty reporter who's determined to find out the truth to shake up the plot even more. We have a brave dragonslayer, a devious dragon, and a woman who refuses the part of the princess.

Christine: This is one of the things that grew on its own. I started the story with the concept of dragons still being alive and hiding as famous humans. Well, if there are dragons, there must be dragonslayers. Of course, they would seem like assassins in the public eye. It blossomed with Xan and his family's history, and the dragon's family too.

Cherie: It is a brilliant concept to consider dragons and dragonslayers this way. A special Valentine’s Day question, what would Xan and Lois do to celebrate Valentine’s Day?

Christine: Xan is a traditional romantic. He would celebrate by taking Lois out to the finest restaurant to dine by candlelight, buying the most expensive wine, and surprising her with a sentimental gift. Perhaps a ring with a ruby red as the fire that burns bright within her, or a cage for her ferret with a latch the critter can't open!

Cherie: Aww! I definitely can see Xan doing that, and he might want to go with the cage for the ferret. I can see why the creature would bother his OCD. *winks* The Dragonslayer is book three in the 13th floor series. What has surprised you the most about writing this series?

Christine: What has surprised me the most is how much I think about all of the stories at once. Usually when I work on a project, I'm focused on it alone. If I get involved in another story, I'll lose where I am in the other one. Yet all these novellas mingle. As I'm working on one, I'll see something that's happening in another. You'll see how the stories link more and more as the series goes on, especially with the fifth and sixth books.

Cherie: I'm so looking forward to the rest of the series! What are you working on now?

Christine: I'm working on the fourth book of the series: The Harbinger. This one is going to be very different from the previous three. Meira is a harpy that fetches souls for Zeus, and when the man she loves comes up on her list, she refuses to let him go without a fight. Zeus agrees her love can keep his soul if he wins three challenges. It'll read like a modern myth if I do my job right.

Cherie: You know me and myths, so I really can't wait to read The Harbinger. If you could recommend any book—not your own—what book would that be and why?

Christine: Only one book?! I can't pick one book. Oh dear. My favorite series of all time is Harry Potter. I love the worldbuilding. To say the wizarding world is magical is an understatement. It's quirky, detailed, and enchanting. Children and adults love these books. I'd love to one day captivate the world with something I've written as J.K. Rowling has done.

Thank you for having me here today, Cherie. It's been a lot of fun!

Rowling is definitely a queen of worldbuilding! You're welcome, Christine! Thank you for stopping by to tell us more about your 13th Floor series! 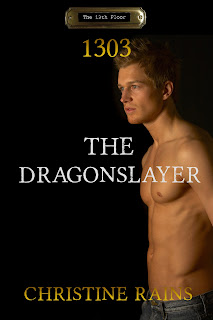 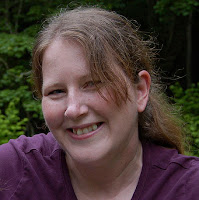 Author Bio:
Christine Rains is a writer, blogger, and geek mom. She has four degrees which help nothing with motherhood, but make her a great Jeopardy player. When she's not writing or reading, she having adventures with her son or watching cheesy movies on Syfy Channel. She's a member of S.C.I.F.I. The 13th Floor series is her first self-published series. She has four novellas and eighteen short stories published.

Christine, it must be fun linking all of the stories together. You were very clever with this series.

Thank you for hosting today, Cherie!

Alex, it's a lot of fun! And some links come up that I don't expect. I get really giddy about those.

Trisha, I stare at the cover a lot too!

Nick, thanks! The gods are so far in fine soap opera form!

Love the idea of your book. Great job, Christine.

Congratulations on the release!

I love the sound of your series, Christine. One of these days, I'll have time to sit down and read them all. :-D

Sounds like a great series - I love the idea of dragons being famous people.

Susan, thank you. Makes you wonder if famous people really are dragons!

Fantastic interview! I'm so intrigued by the fourth 13th Floor book now. I absolutely love harpies! (I wrote a book that featured them once. They're such fun characters to write!)

Heather, thanks! I hope this harpy catches readers' attention.