Friday Excerpt: Once Upon a December Nightmare

For sanity's sake, I've decided to have Fridays be all about my writing, whether it be new flash fiction or an excerpt from my writing. This week and the next, I have some excerpts from Once Upon a December Nightmare for you. 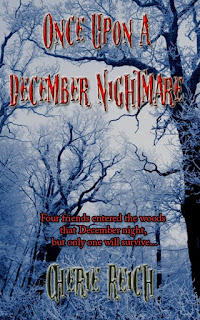 Cassie’s heart jumped with each bump on the unpaved road. Gravel crunched underneath the tires, yet somehow the dilapidated ‘77 Dodge truck withstood the beating. Squished in the front seat with Denise, James, and Mary, she tried her best not to hit anything or anyone as the truck bounced mercilessly over another pothole.

“So how do you like your redneck adventure, Cassie?” Denise asked with the harsh laugh of a smoker while awkwardly shifting her plump hips between James and Mary.

“It’s great,” Cassie said without enthusiasm. When the truck ran over a monstrous rut, her head knocked against the cold window, and she sucked in air through her teeth. Pushing her dark brown hair aside to rub the spot, she glanced over to seventeen-year-old Mary. Although three years younger and still in high school, Mary was Cassie’s best friend. “You know . . . I’m starting to think we should have stayed to watch another movie.”

“Me too,” Mary whispered to Cassie.

The truck screeched to a halt. Dashboard lights illuminated Mary’s grimace and her white knuckles from clutching the seatbelt so hard. At least she had a seatbelt, unlike Cassie and Denise.

“What is it?” Cassie peered ahead.

The headlights struck upon a thick maple tree upturned on its side across the single-lane road. Snow glittered upon the bark.

“Do you think we can get around it?” she asked James. She didn’t know the twenty-two year old very well since Denise had started dating him while Cassie was at college, but Denise had told her that James and she enjoyed traveling this trail. They definitely knew this old mountain road better than Mary or she.

“Not sure, but I’ll get out and see.” He shrugged, took off his baseball cap, and ran his fingers through his thinning brown hair. When he opened the door, a blast of frigid air blew across the seat. He climbed out and walked in front of the headlights to study the tree.

Cassie pulled her green winter coat closer to her while Denise and Mary shivered. It wasn’t the first tree that had gotten in their way, but this one appeared to completely block the one-lane path. James had told them this mountain trail led back to the main road. If only they hadn’t deviated from their night’s plans, then they’d all be home by now.

The entire night was a bust. First, they’d all packed into the faded black vehicle to go to the movies. When they got there, Lord of the Rings: The Two Towers was sold out, and they couldn’t decide upon another movie to see. So they left and had dinner at Subway. Instead of heading home after dinner, James came up with the “brilliant” idea of riding around for the hell of it. Now, here they were in the middle of nowhere on a one-lane off-road trail with a tree blocking their escape from this nightmare.

Cassie sighed. They should have known there would be some trees and branches down. The past couple of nights had brought snow flurries and horrible howling winds. The forestry service probably hadn’t had a chance to examine the road and remove any debris from its path. Tonight at least they didn’t need to worry about a snow-covered road. Only a dusting of white lined the forest floor.

Cassie glanced behind them. The brake lights bathed several feet of forest in red. Trees lined their path like enemy soldiers waiting for the cue to fire. The isolation and the cold blackness of this place caused her to shiver. Anything could happen to them out here, especially since everyone thought they were at the movies.

James got back into the truck and slammed the door shut.

“How does it look?” Denise snuggled close to him.

“No way around it. We’ll have to back out. There’s a place not far from here to turn around.” He threw the truck into gear and reversed down the road.

Tree branches slapped across the passenger-side window, and Cassie winced, moving closer to Mary. She didn’t dare glance backward. James couldn’t possibly see very well backing up, and she didn’t want to know what they were coming close to hitting.

“This is fun, isn’t it?” Denise looked over her shoulder. They edged closer to the clearing where they could turn around. “I bet we’ve gone seven miles down this road.”

“How much farther is it to the main road, if our path hadn’t been blocked?” Cassie noted Denise seemed to be having more fun, and she was glad how James brought that out in her old friend. For many years, Denise’s seriousness and so-called maturity strained what friendship she and Cassie once had. She hoped Denise had changed and loosened up. They were twenty years old, after all! They should have fun.

“Probably another mile.” He laughed, passed by the clearing, and pulled into it. “Seven more to go instead.”

“Great.” Cassie sighed, turned her head, and looked into the clearing. “Oh, my god!”

The headlights landed on four carcasses. Their cold black eyes stared blankly toward them.

“Are those . . . deer?” Being a vegetarian, she had little desire to see dead deer out in the midst of the forest. The sight churned her stomach. She lowered her gaze to the dashboard.

“I think so.” Mary gulped. She was an animal lover like Cassie.

“It looks like they were just laid out there. Creepy cool.” Denise leaned forward. Her nose pressed against the windshield and created a smudge against the glass.

“Some hunter or hunters probably wanted the antlers and left the rest.” James parked the truck and opened his door. “Coming, Denise?”

“Sure thing.” Denise stepped out and followed him, but Mary and Cassie stayed behind.

“Who would do such a thing?” Disgust coated Mary’s voice as if she had eaten something bitter. She twirled a red wisp of hair around her finger. “It’s so wasteful. They could’ve donated the meat.”

“I agree.” Cassie brushed her hair out of her eyes. Denise’s bleach-blond hair gleamed in the headlights, and their breaths came out in smoky plumes.

Cassie didn’t like hunting as a whole, but she understood its purpose. She would never condone killing a creature for sport, but her beliefs were not well-received in the country where hunting was still a rite of passage. Some kids even took off from school for the first day of deer season. She tsked and shook her head at how the hunter arranged the deer. Their heads pointed toward the road, and they were placed in a straight line. Four pairs of eyes appeared to stare right into her soul. From the truck, she couldn’t tell what might have killed the deer.

“Someone took a lot of time and effort to place them like that,” said Cassie, shivering. “It’s really disturbing.”

Finally, Denise jumped into the truck, followed by James.

“Yeah. Didn’t even see any signs where the antlers were. Someone just left them.” James shrugged and chuckled.

“I didn’t notice any bullet wounds.” Denise trembled and tucked a strand of hair behind her ear. “I think their throats were slit.”

“Probably just some sicko having a little fun.” James backed the truck out of the clearing until they faced the way they had come. He shifted the truck into drive so they could leave the clearing and head home.

An interesting note about Once Upon a December Nightmare: It's loosely based off a real event that happened to my friends and me on a December night back in 2002. Our adventure ended much better than what happens in this story, but the deer episode in this part really happened. Freaky, no?

Add on Goodreads
Posted by Cherie Reich at 8:00 AM

Email ThisBlogThis!Share to TwitterShare to FacebookShare to Pinterest
Labels: cassie, excerpt, horror, once upon a december nightmare

The deer part is really freaky.
Lots of atmosphere in this one!

I liked Cassie's voice here. Really creepy vibe comes from the deer- sorry to hear that was true. Ugh!!

Loved this! I'll be checking back on Fridays for sure :)

I think stories are always better when they have reality backing them up. Fiction based in any loose way off reality always has a unique thing about it. Thanks for sharing Cherie and I have tagged you for a challenge on my blog.

Can't wait to read this!!

I cannot wait to get my hands on this! The deer part really creeped me out! Since it's based on something that happened to you, that's extra creepy -_-

Great character voice and I agree with the others... the deer part is super creepy.

Very freaky . . .I grew up in a small town that had an active cult nearby . . .Halloween was a night that all animals (all) had to be locked up so that the cult didn't get a hold of them. If not . . .well, it was scary, ugly stuff. The local police never could seem to catch them.

I'd be creeped out by those deer heads staring at me. It's OK if they're alive... but that could be creepy, too. But that's off the topic. :)

You're a very talented writer, Cherie.

The deer make the hairs stand on end. Great atmosphere!