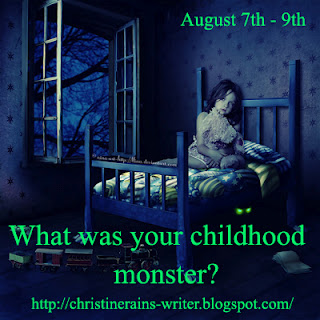 From August 7th - 9th, bloggers are talking about their childhood monsters in Christine Rains' blogfest. Click here for the other entries.

I was four years old when the monsters came for me.

Some children have monsters under the bed. Others have a monster in the closet, but I didn't have something quite so normal. After all, you can close the closet door or shove things under the bed to stop those monsters. No, my monsters couldn't be stopped and had me sleeping with the light on until just a year or two ago.

My monsters emerged from the very walls.

They appeared as large, misshapen humans. A green luminescence glowed around them. They would surround the bed and reach out for me as they warped the space under the bed into Hell. Their icy hands would snag an ankle or an arm, so I shrank into the middle of the bed with the covers well over my head.

If I peered into the depths of Hell under my bed, a hot sulfuric belch would bubble up from the bottomless pit. I would fall to my death, if these monsters grabbed me. I always knew when they had entered the room too. So many times they'd almost snatched me because I fell asleep without being covered in blankets.

I cried out at first, but my parents thought they were just bad dreams, but how can you have bad dreams when you're awake and too scared to sleep?

I started flinging myself from my bed and racing into the hall. The monsters couldn't pass through the bedroom door. Sometimes I slept on the cold wooden floors. Other times, I crept into my parents' room and slept under their bed.

Finally after weeks of begging and lack of sleep, I persuaded my parents to leave the light on. With the light, the monsters vanished.

I was safe. Finally.

I believe the wall monsters have left me alone. Perhaps they've found some other child with an overactive imagination to bother. But I still keep light close and the bedsheets ready, just in case.
Posted by Cherie Reich at 8:00 AM

Brilliant, I think everyone remembers the terror fueled dash to your parents room, your heart racing as you tried to outpace the darkness.

Scary stuff!! I don't blame you for sleeping under your parents bed!

Coming out of the walls is creepy.

Wow, those are scary monsters! You had quite an imagination!

And I always love the child-logic: The monsters can morph through the walls, but blankets and the bedroom door can stump them...

Very creepy! I think though that sleeping under your parents bed must have been creepier...LOL!

Not surprising that a bunch of writers (see - folks with hyper imaginations) have such creepy and diverse childhood fiends.

Gorgeous imagery, Cherie. I could feel the monsters coming and wanted to scream for you. I had this thing about Dracula that seems silly now but, wow, it wasn't at the time!

Wow, I am afraid of your childhood monsters. I kept thinking of the short story, The Yellow Wallpaper.

Scary stuff, Cherie! This piece reminds me of the first time I heard the trailer for the Exorcist when I was very young. It haunts me to this day.

Wow, right out of the walls! Now there's a horror story waiting to be written. :) Thanks for sharing your monsters with us and for helping promote my novella.

Sounds like an episode of Supernatural. Creepy. I'm sorry you had to deal with that. There is something about keeping the light on at night for kids.

Those sound scary. Monsters who can pass through solid objects are much more intimidating!

That is terribly creepy. It's a shame parents can never see these things too!

Dude! That was a seriously bad trip! YOWZA!
Some Dark Romantic

Freaky, and well written! I had a recurring nightmare of a hand reaching out of the wall above my bed. Problem was, I was awake while having that nightmare.

These are some of the scariest monsters I have heard of! I have been enjoying the tour and reading about various monsters. Wall monsters- yikes!

I'm interested that you slept UNDER your parents bed. I wouldn't have gone near the underneath of ANYONE'S bed if it had been me!