Today I would like to welcome Julie Reece, author of Crux, to the blog! At the end of the interview, there is also a giveaway!
My comments in bold.

Julie, tell us a little about yourself. Hello. I’m an artsy, animal loving, movie watching, wife and mom who loves to write. My favorite place to read is in a hot tub full of bubbles, which is why I don’t own a Kindle. I stick my Hershey’s candy bars in peanut butter when I’m depressed, and really want to jump out of a plane before I die … that and see Italy.

In two sentences, describe your novel Crux. Charged with ending a curse, seventeen-year-old Birdie Orin must free Viking souls trapped in an ancient battle using the power of a magic amulet. When she shares the news with new friend Grey, he follows uninvited, and she must choose between fulfilling her quest and protecting the guy she’s falling for. (Can I just say I sucked at that?)

The two-sentence description is really hard, isn't it? How did you come up with your idea for Crux? I had a dream. (Sheesh, sorry, I know, but it’s just true.) A pretty blond trailed behind a man with a suitcase through a crowd in Paris. He stopped, unzipped the bag, faced the girl and I woke up. I followed my nose from there. I just had to know what was in that suitcase and what happened next.

I find inspiration from dreams too. No shame in that. *grins* I love the mythology and history in Crux. Why did you decide to go with the Norse? Also, how much research did you do for your novel?  Aw, thanks! I’m a fan of mythology as well, huge, in fact. I’m a closet, comic book artist and Thor was my hero. (Truth? Had he been real, I would have wanted to have his children.) When I thought about trying something different from what other YA authors were doing, my brain kept heading north to the Vikings. They were also a big inspiration to Tolkien for Lord of the Rings, one of my favorites.

Thor's not real? How disappointing! I've always been a fan of Odin. How did you discover J. Taylor Publishing and decide to have them publish Crux? I belonged to a writing critique site and met some wonderful aspiring authors. One of my critique partners on the site had just recently had a book accepted by J. Taylor and suggested I try Crux there. I took a deep breath, sent it and heard back right away. Yes. They wanted my book! I still pinch myself this is actually happening to me.

Yay for critique partners! What are you working on now? Ah, I have a couple irons in the fire. A historical, paranormal (sizzling) romance is finished, and I’m editing it now. Beyond that, I’m a third finished with another urban fantasy and have plotted a contemporary romance. All YA.  Young Adult is my heartbeat.

YA is awesome! If you could recommend one book, what book would that be and why? You know that question is like asking me to eat one potato chip, or take a bite of chocolate and stop, right? Okay, I’d tell you to read Jane Eyre. The trials Jane overcomes twist my heart every single time I read it. The mind games that Mr. Rochester plays with his woman are cruel in the most sick, satisfying sort of way. Devotion. Passion. Oh my gosh, it’s fantastic. *sigh*

I'm a fan of Jane Eyre too! Thank you!

Thanks for having me! So much fun and great to meet you.

Julie has sent me some items from Crux for a giveaway! Now you can also have a chance to win bookmarks and a water bottle of Crux. All you have to do is comment below to be entered. I will announce the winner on Thursday. 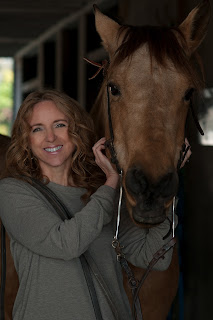 Born in Ohio, I lived next to my grandfather’s horse farm until the fourth grade. Summers were about riding, fishing and make-believe, while winter brought sledding and ice-skating on frozen ponds. Most of life was magical, but not all.

I struggled with multiple learning disabilities, did not excel in school. I spent much of my time looking out windows and daydreaming. In the fourth grade (with the help of one very nice teacher) I fought dyslexia for my right to read, like a prince fights a dragon in order to free the princess locked in a tower, and I won.

Afterwards, I read like a fiend. I invented stories where I could be the princess... or a gifted heroine from another world who kicked bad guy butt to win the heart of a charismatic hero. Who wouldn't want to be a part of that? Later, I moved to Florida where I continued to fantasize about superpowers and monsters, fabricating stories (my mother called it lying) and sharing them with my friends.

Then I thought I’d write one down…

Hooked, I’ve been writing ever since. I write historical, contemporary, urban fantasy, adventure, and young adult romances. I love strong heroines, sweeping tales of mystery and epic adventure… which must include a really hot guy. My writing is proof you can work hard to overcome any obstacle. Don’t give up. I say, if you write, write on!
About the Book:

She should have run. Now, she’ll have to fight.
Eighteen year old Birdie may be homeless, but she’s surviving, that is until a mysterious guy throws money in the air like a crazy game show host, and she grabs some with the idea she’ll be able to buy dinner that night. In that singular moment, unassuming Birdie becomes the girl in everyone’s viewfinder. Thugs want to kill her. Money-guy wants to recruit her. The very hot, very rich, and very out of her league Grey Mathews wants to save her.Birdie, though, wants nothing to do with any of them, until she realizes fate didn’t bring them all together. Her heritage did.

Now, with only twenty-one days left, she’s got to decide whether to follow in the footsteps of those before her or risk her life for people she’s only just met.

http://www.jtaylorpublishing.com/books/13
Posted by Cherie Reich at 8:00 AM

Great interview! I love YA too.

Hi!
I just wanted to thank the awesome sauce that is Cherie Reich for having me on her blog today. I had a blast and love her gorgeous site!

If you've already read Crux—thank you! I hope you enjoyed it :) If you are thinking about reading it, you have my appreciation in advance that you are willing to give a new author a try :)

Congrats to Julie. Great to read how you overcame your learning disabilities.

I also love to read and relax in a hot tub. The book cover looks very interesting.