We have a special treat today with an interview with Rachelle Ayala, author of Michal's Window. I had the honor of being her editor for this fantastic novel. Even though it's set in Biblical times, it's not preachy, and it showcases a fascinating character: Michal, David's first wife. And someone is going to go walk away with a copy too.

Tell us a little about yourself and what your writing process is like.
I’m a computer geek by nature, so it’s somewhat surprising that I’ve written a full-length novel. But I find the skill-sets similar. Writing software involves design and planning, as well as seat of the pants coding. Some programmers whip up tons of untested code and then debug it into viability. This is the NaNoMoWri, write the first draft in a month and take ten months to revise, gunslinger approach. Others are methodical and write beautiful and tedious design documents, review it to the wazoo and polish it lovingly through endless design meetings before writing a single line of code. I suppose you can call these the plodders, er plotters.

I’m pretty much the code and test and iterate type. I have a good idea what the program has to do. I don’t do much design, not even something you can scribble on the back of an envelope. I have no use for a white board. Now that I’m retired, I don’t care if my ex-boss reads this. Instead, I place basic guide points in the code. Input, data structure, partial results, output. I figure out how to get the data into the program, transform it through the required steps (while testing) and format the final output.

As a writer, I do the same thing. I have my major plot points figured out in my head. I know what the story problem is (requirements). I have an idea of a hook, and point of no-return, and maybe an inkling of the dark moment and the character transformations that are needed to get to the climax. I usually have my ending figured out. And then I just write.

I unit test at CritiqueCircle.com and use beta readers for system testing.

In two sentences, describe your novel Michal’s Window.
Michal's Window is a story of one woman's journey through love and heartache to self-realization. As one reviewer said, "So, once I let the modern feminist inside of me relax, I realized how timely her story is, because, sadly, many of the things she has to deal with are things that women still face today."

What about Michal inspired you to tell your version of her Biblical story?
Michal was a courageous and often misunderstood person. She was one of the few women in the Bible to assert herself by putting her love into action. She stood up to her murderous father to save David’s life and later on, stood up to King David himself when he danced through the streets of Jerusalem in his underclothing.

Since pastors and commentators vilify Michal frequently, I wanted to tell her side of the story.

What research did you do to write Michal’s Window?
I relied mostly on the Bible, but also read a few reference books on life in Ancient Israel. A very useful guide was a travelogue by J. W. McGarvey Lands of the Bible (1881). It showed the plant and animal life, terrain and climate of the Bible lands. I found most of the biographies written about King David to be useless and sensational. They either tried to paint him as an evil person or sanctify him as a hero who could do no wrong. David and Michal were very real people who made mistakes like anyone else. I tried to bring out their humanity while keeping in mind the heroic actions and extraordinary things they did.

Why did you decide to self-publish Michal’s Window?
I realized early on that my book would not fit traditional publisher guidelines. It is not strictly a romance because both characters had other lovers. David was a polygamist and shockingly, Michal was married to another man while David was in exile. It is not strictly historical because I invented an entire storyline involving Philistines and added another love interest for Michal. It is not Christian fiction because it includes grittier scenes than generally acceptable. Yet the scenes are too tame for Historical Romance. If I wanted to categorize Michal’s Window, I would say it is Biblical Women’s Fiction with Romantic themes.

What else are you working on?
I’m working on a romantic suspense involving fast cars, fast code and fast women. Broken Build is a story set around the fast paced culture of a Silicon Valley startup complicated by code theft, extortion and murder.

I also have a psychological thriller in the back of my mind, but I refuse to allow myself to write a word of it until Broken Build has gone to my wonderful editor.

And perhaps the hardest question: if you could recommend one book, what would that book be and why?
This is the easiest question of all. The Holy Bible, King James Version. There’s no other book like it! Read it! B-I-B-L-E (Basic Instruction Before Leaving Earth) 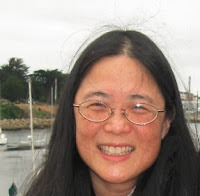 Rachelle Ayala was a software engineer until she discovered storytelling works better in fiction than real code. She has always lived in a multi-cultural environment, and the tapestry in her books reflect that diversity. Rachelle lives in California with her husband. She has three children and has taught violin and made mountain dulcimers.

Now I have a special giveaway for you. One lucky commenter is going to win an e-copy of Michal's Window. All you have to do is comment on this post to be entered to win. Simple as that, and I'll announce the winner during Wednesday's Writing Update on June 20th. Thank you for visiting with us today, Rachelle, and I look forward to reading Broken Build!
Posted by Cherie Reich at 8:00 AM

This sounds like a fascinating book. I love stories that take a supporting character from the Bible and flesh out their story.

I love your geeky nature to writing. Congrats on your new book! The subject of this book doesn't really interest me, however, your next one does. I'll be sure to be on the watch for Broken Build and the psychological thriller.

Such a captivating subject! Sounds like your passion and interest for it will definitely come through in the story.

Wonderful interview. The book sounds immensely intriguing. I love the idea of telling someone's side of the story that you never get to hear otherwise. Good luck, Rachelle! And geeks rule! :)

Interesting comparison to programming. I'd never thought of there being such a strong link between the two.

how interesting!! everything really. I would one to be an author some day....she has an interesting background too.
I am your newest follower..pls follow back if you can.

This sounds like an amazing book! Thanks for telling us about it

Hi Rachelle...I enjoyed your post and the interesting (if mystifying - to me) comparisons of the writing process to programming:) I am a "seat of the pants" writer who also has sort of an idea of certain key plot lines, but characters can constantly (and interestingly)create surprise plot twists. I can't imagine the challenge it must be to take biblical historical characters and do the "what-if's" with them. Good for you, and best of luck with your book.

Thanks for all your comments. I never dreamed there'd be so much similarity, but yes, that restructuring is very much like revisioning. And if you change something later, you have to go back and regression test, i.e. make sure all the other plot and character points stay consistent.

Would it bother people to know that I kept a spreadsheet for each scene? POV character, key events, age of characters, dates (especially important for computing pregnancy due dates), seasons.

Writing is so much like engineering. When I proofread my final paper proof copy, I created another spreadsheet to spot-fix each document, the HTML and the Word. Okay, so I didn't go all crazy and enter each into a Bug database. No DDTS ID. Glad my ex-boss isn't reading this!