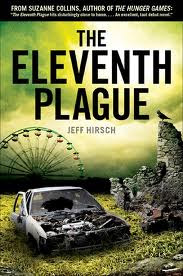 The Eleventh Plague by Jeff Hirsch
Publisher: Scholastic Press (September 1, 2011)
To Purchase: Amazon
The wars that followed The Collapse nearly destroyed civilization. Now, twenty years later, the world is faced with a choice—rebuild what was or make something new.

Stephen Quinn, a quiet and dutiful fifteen-year-old scavenger, travels Post-Collapse America with his Dad and stern ex-Marine Grandfather. They travel light. They keep to themselves. Nothing ever changes. But when his Grandfather passes suddenly and Stephen and his Dad decide to risk it all to save the lives of two strangers, Stephen's life is turned upside down. With his father terribly injured, Stephen is left alone to make his own choices for the first time.

Stephen’s choices lead him to Settler's Landing, a lost slice of the Pre-Collapse world where he encounters a seemingly benign world of barbecues, baseball games and days spent in a one-room schoolhouse. Distrustful of such tranquility, Stephen quickly falls in with Jenny Tan, the beautiful town outcast. As his relationship with Jenny grows it brings him into violent conflict with the leaders of Settler's Landing who are determined to remake the world they grew up in, no matter what the cost.
Follow the author:
Blog
Twitter
Posted by Cherie Reich at 8:00 AM

The more I hear about this one, the more I want it :-)