Personal Thursdays: Wisdom from Cats: Catching your tail or a shadow of a tail

*I would’ve taken a video of my cats catching their tail—or shadow in Romeo’s case—but they didn’t cooperate.*
Watching cats’ behaviors can be quite entertaining and philosophical.
Romeo has a long tail, but instead of trying to catch it, he’ll spin in circles chasing a shadow. The tail is right in reach, but he is a dreamer, doing his best to grasp hold of an elusive dream in the guise of his tail’s shadow. 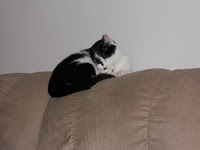 Cinderella (or Relli for short) has a short tail. She’s a small cat anyway, but she’ll spin around and before you know it, she’ll have the tip in her grasp and stand on it. Since her tail is short, when she stands up, it pulls out from under her paws, and the chase is on. When she really catches her tail, she enjoys giving it a quick bath while holding it in her paws. She is a pragmatist, a realistic. She grasps hold of what is there in front of her. Sometimes she lets go, but it’s there for her to grab again.
Cats are a lot like people. We chase after dreams. Sometimes we seize them. Sometimes they slip through our fingers. Sometimes we sprint after an idea that will remain just in the shadows, always beyond our reach. 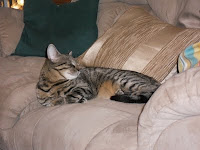 Like Romeo, we can have fun chasing after that elusive dream, the shadow of a tail, but I think we need some of Relli in us too. We need to know when to catch it and stand on it to keep it there with us and when to let go and begin the chase again.
Writing is a lot like that too. We create the idea. Sometimes it remains just an idea. Other times we hold it and run with it. Sometimes even then we have to let it go and begin the chase anew.
So what are you? Are you a shadow chaser? Or a dream catcher?
As for myself, I believe I’m a bit of both.
Posted by Cherie Reich at 8:00 AM

I really like this post! Makes me miss having cats again. Being a writer has a lot of ups and downs. I'd like to say I'm totally a dream catcher, but at times, it feels like it's just a shadow. I have to catch whatever is casting that shadow!

What an inspired post, Cherie. I am like you, a bit of both. Some dreams we will sadly never realize. Others can be stoked until they catch fire and still more need a bit of a bath.
Nancy

Great post- I love how you put the "tails" into writing perspective for us and great use of metaphors.
I am a little of both (I think)

Hmmm. I want to be a dream catcher.