Reflections - A to Z Blogging Challenge and Crusaders 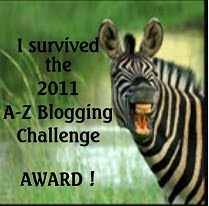 Thank you, Elizabeth Mueller, for the blog award!

Yes, if you were anywhere around the blogs in April, you might have come across the wonderful craziness of the A-Z Blogging Challenge.

I completed my posts early and had them set to go on their respective days. I read as much as I could of other people's blogs and commented when I could. I must admit I failed when it came to getting around to everyone's blogs. Granted 1300 blogs is a lot, but I still feel bad. April came with its own types of craziness. I'll do better next year. *crosses fingers*

I enjoyed the posts I read. It's amazing how we can come up with such different ideas for each letter...and even the same ideas for some. I already have plans for what I might do next year (I'm leaning toward 26 days of flash fiction) and possibly 26 days of book reviews/promotion on my book reviews blog.

I think I should start writing those posts up now. *laughs*

I want to thank everyone who participated and planned this wonderful challenge. 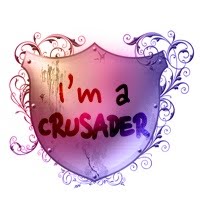 It also turns out that April 30th was the end of the Second Writers Platform Building Crusade. It was great fun. I did better about getting to everyone, but I didn't get a chance to comment as much as I wanted. (I really need to get better internet at home.) It was so much fun, and I loved participating in our challenges. Then again, I'm rather fond of flash fiction, which is what I wrote for each one.

Rach will be hosting another crusade in August-October. I don't think I'll be participating in that one. It's not that I don't want to, but I won't have the time. I need to polish up Virtuoso then, send out query letters to agents, attend the James River Writers Conference, and plan my NaNoWriMo novel for November 2011. I do encourage everyone to join the crusade at least once. It's a lot of fun.

At the end of January, I had 50 followers. Yep, I just celebrated it with a contest. Then I became a Crusader and joined the A-Z Challenge. As of this moment, I have 274 followers. That's an increase of 224 blog followers in three months.

I'm still in shock over it and very grateful.

Thank you.
Posted by Cherie Reich at 1:04 PM

I had some of the same challenges as you. If I do the challenge again, I gotta find a better way of dealing with it.

BTW - Found out through the author loop that you're a WCP/FB author. I'm in the system, book (Hardware) not yet published.

Back to work now on all the projects I left hanging over this past month.)

I wanted to take part in the next crusade as well- but I don't have time with classes and kids to do that.

It's awesome that you finished it! ^_^ Maybe when I have some time, I'll have to do the challenge on my own. Too many other things to do first, though.

Wow, that's great about the challenge and all of the followers! You have a great blog, Cherie. :)

Hurrah that you have so many followers! Guess I should get into doing stuff like that. Though I don't think people would find my posts that interesting. :P

Yeah, I'm undecided about the next Crusade too. The first was great, but I feel like I've done my fair share of huge challenges this year, and I have plenty of challenges I've set myself to get on with. :P