W is for Writing and Wednesday's Writing Update

*It's the last few days to the A-Z challenge. I apologize for not being as active as I hoped. Real life has that way about it. I still hope to visit blogs within the coming months.*

I’ll be the first to tell you I wasn’t always a writer. In fact, I was convinced through English classes that my writing sucked and I should even consider giving up the entire language and moving to a foreign country.
Then I found roleplaying and it slowly led to writing fan fiction. I tried my hand at a couple original short stories and the starts of a few novels (only wrote a chapter or two). I wrote nothing new for several years beyond the roleplaying. In January 2009, I sat down and decided to write a novel I had in my head for three years. I suppose the rest is history…or rather just the beginning.
On SheWrites last year, they asked writers to write why they wrote in six words. Six words, that’s it. I didn’t join in, but I thought about it and why I write. This is what I came up with: I write to breathe, to live.
It’s not easy being a writer, but if it was easy, then it probably wouldn’t mean as much. I’d grow bored of it like I did singing. Writing is always a challenge. Some days are good. Others, well, I’m still feeling that English class burn.
Through it all, though, I write to breathe, to live.

On to Wednesday's Writing Update
I took Sunday off from writing for Easter. It was a mistake, although I needed a brief break.
I finished through chapter ten in Virtuoso. I hope to get back to rewrites after this week.
I plan to submit "Mage Game" to Sword and Sorceress XXVI later this week. I have it written and critiqued. I just need to do another edit or two and submit it. The deadline is May 13.
I finished my critique assignment for PWP, and I have eighty pages left to edit for them. I have to have it finished by Saturday in order to count it on my April invoice. I'm also a new freelance editor for Hazard Editing. I'll mainly do proofreading and more mainstream edits, if that's what the author wants.
The mistake of taking Easter off comes here. I'm involved in a secret group project. I can't say much more than that, but I have to have 10,000 words written for my character by May 1st. I can write that much, but it'll involve some quick thinking on my part to get it done. So far, I have over 3,000 words completed.
I better get back to writing. 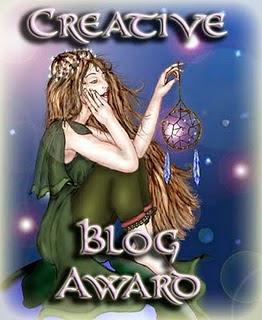 And as a pleasurable side note: Deirdra at A Storybook World has awarded me with the Creative Blog Award. She's so wonderful and artistic. She has interviews and all sorts of things and is very supportive. Please take a moment to check out her blog, if you haven't already. Thank you, Deirdra!
Posted by Cherie Reich at 8:00 AM

Email ThisBlogThis!Share to TwitterShare to FacebookShare to Pinterest
Labels: a storybook world, a to z blogging challenge, award, critique, editing, w is for writing

Congratulations on your award!

And for what it's worth, I didn't like writing in high school either.