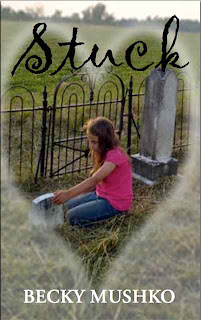 From Becky's website, here is a description of Stuck: STUCK is a 41,000-word middle-grade paranormal novel, in which an eleven-year-old girl—stuck in grief over her mother’s death—helps a ghost who’s stuck on earth until she finds her daughter. Here's a brief synopsis:

When fifth-grader Jacie Addison is called to the office, she thinks it's for slapping Nicole Fannerby, who'd ridiculed Jacie's mother. Instead, her father is there with bad news—Jacie's mother died earlier that morning. Jacie is stuck in her grief, but she and her father manage as best they can. In June, Jacie goes to horse camp—where she's stuck with Nicole as a bunk-mate. At her birthday dinner in July, her father gives Jacie a locket and introduces her to Liz, his former high school sweetheart and now fiancée. Jacie, angry about her father’s decision to remarry six months after her mother’s death, is soon stuck with her future stepmother in a five-hour drive to a Virginia farm. When Jacie can’t stand being stuck with Liz’s obnoxious nephews at the farm, she retreats to the woods and encounters Callie, a ghost stuck on earth until she locates her daughter. The locket’s history and a bit of sleuthing help Jacie find the information Callie needs. Before Callie leaves, she promises to send a sign if she finds Jacie’s mother on the other side. When Jacie has almost given up hope, the sign arrives in a way she never imagined.

If you get a moment, please visit Becky's website and read more about this and her other works.
Posted by Cherie Reich at 8:00 AM

This sounds like a great book. I bet the ghost and the girl heal each other. :)

How intriguing - I wonder what the sign is! I love a good ghost story. :)

Sounds great, I'll have to check it out.

Thank you, Cheri, for promoting my book!

Oh, wow. I love ghost stories. Thanks for spotlighting this. I hadn't heard of it yet.

Sounds like a great book! Thanks for posting about it.