This Wednesday, an anthology that I have a story in will be available for purchase. This particular anthology is very dear to my heart, and I am very proud to be one of the authors to have a story ("Tradition") in it. When I first heard about the oil spill, and I felt horrible for the people in the Gulf. It seems like they've had nothing but bad luck in the past few years from hurricanes to this environmental disaster. The best thing about the Oil and Water...and Other Things That don't Mix anthology is all the proceeds go to raise funds for the Gulf Coast clean-up. Here is the media release for the anthology. During the season of giving, consider buying a copy for yourself or a family member or friend. For one, you get a great anthology. For two, you are giving a charitable donation to help others in need. 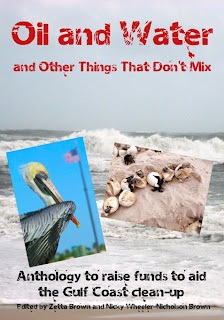 Oil and Water...and Other Things That Don’t Mix
Anthology to raise funds to aid the Gulf Coast clean-up
Edited by Zetta Brown and Nicky Wheeler-Nicholson Brown
Published by LL-Publications
Release Date: December 15, 2010
$14.99 (US) / £9.99 (UK/EU)
ISBN:  978-1-905091-85-0
© LL-Publications, 2010
The BP oil spill disaster in April 2010 prompted authors Zetta Brown and Nicky Wheeler-Nicholson Brown from the She Writes™ online community of writers to develop the charity anthology Oil and Water...and Other Things That Don’t Mix. All proceeds will be divided between charities that not only help the wildlife and environment, but also the people living in the area. With this in mind, they picked the charities of The Bay Area Food Bank (www.bayareafoodbank.org) and MOBILE Baykeeper® (www.mobilebaykeeper.org) to aid their continuing mission to help the Gulf Coast communities affected.
After placing a call for submissions last June, the resulting anthology features award-winning authors, poets, journalists, bloggists, newly published authors, and talented new authors making their debut. The women and men contributing to the anthology came from everywhere wanting to do something to help the Gulf region.
The official theme of the anthology is “Conflict...Resolution optional.” Not all stories are specific to the South, but all have the theme of conflict and there is fiction and non-fiction inside. The stories, poems and recollections will make you laugh, cry, think—and some may even get you angry—and topics range from personal relationships to dealing with the kitchen oven.
The editors of Oil and Water...and Other Things That Don’t Mix are from the South. Zetta Brown is from Texas but currently lives in Scotland with her husband Jim Brown, and together they own and operate LL-Publications that will publish the anthology. Nicky Wheeler-Nicholson Brown was born and raised on the Gulf Coast of Alabama. She is currently an editor and ghostwriter for several publishing houses in New York and the Berkshires and is following in the footsteps of her grandfather Major Malcolm Wheeler-Nicholson, founder of DC Comics.
“Despite our names, Nicky and I are not related,” says Zetta Brown. “In fact, we have never met in person. We met through the social network She Writes™ in the Southern Writers subgroup.  When the oil disaster happened, the members in our little group were disgusted—which is Southern for ‘pissed off.’ I had the idea of doing an anthology to benefit charities dealing with the disaster and I approached Nicky because she has deep roots in the Gulf. She came up with the name and we’ve been running with it ever since.”
Nicky Wheeler-Nicholson Brown adds, “I am a seventh generation Gulf Coastal inhabitant and the only way I can describe how I felt once the oil started gushing is that my heart broke. My mother’s family arrived in New Orleans around 1820 and we’ve been somewhere on the coast between there and Pensacola, Florida ever since. The Gulf Coast has been through so much, particularly in the last six years--one devastating hurricane after another, economic difficulties, over-development and now this horrific oil spill. The charities that we honor in our donations are doing the best they can to help the people and the environment on the coast.”

I can't wait to get mine in the mail. Someday you'll have to sign it for me!

Of course I'll sign it for you someday! Hopefully someday comes sooner than later. :D