Surprise, it's Saturday, and I'm at work again.

Writing my NaNoWriMo novel has become a surprise despite all my well-laid plans. As you know, the novel was titled Sarah's Nightmare. I liked this title, and when I first envisioned the novel, it was the perfect title.

Now that I'm writing the novel, however, I realized the book wasn't about Sarah, her nightmares, and overcoming them. It's about the three main characters: Sarah, Marc, and Ted. It's their journey to find what each one of them is missing as well as finding the missing children. Sarah is missing a piece of who she is. Ted is missing understanding in human relationships, despite being a psychiatrist. Marc is missing his abducted brother. Children are missing. Thus, the new title is MISSING. It's simple. It fits the theme, and it encompasses the entire story instead of just Sarah's part in it.

Since I realized the story was about all three main characters, I modified my old blurb and created a new one. Here it is:

A government secret program nestled under the Blue Ridge Mountains. Five children ripped from their homes at twenty-year intervals. With one exception in 1985.
Thirty-year-old Sarah Richards is an adjunct professor for Star City College, pages away from finishing her doctoral thesis, and has a live-in boyfriend, psychiatrist Theodore "Ted" Merriweather. Despite being happy and settled in her life, something is missing in her life.
Thirty-nine-year-old Ted Merriweather has never been happier with his girlfriend Sarah and working at his own psychiatric practice, but despite his knowledge of human behavior, he is missing the signs of danger ahead.
Twenty-eight-year-old Marc Bishop is a semester away from graduating SCC with a Masters in Criminology. He misses his older brother, who was kidnapped and never seen again when Marc was three-years-old.
When Sarah begins teaching Marc's History of Criminology course, a current case of missing children sucks them into the investigation. These abductions have roots in the past, and Sarah, Marc, and even Ted must find these children before they're all missing forever.
Now, I'm not very good at cover art, but I sometimes like to try my hand at it using Microsoft Word. Here is the cover art for MISSING while I'm doing NaNoWriMo. 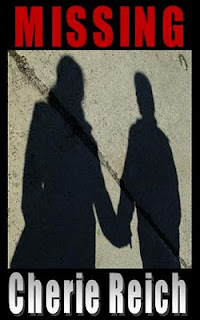 This is actually the first time I've written a novel and had the title change. I like to think I'm pretty good about naming titles and short stories, but I have to admit MISSING fits so much better. I like it.
Posted by Cherie Reich at 11:32 AM