It's Promo Monday, and today I'm promoting SHAKEN by J.A. Konrath. SHAKEN is number seven in the Jack Daniels Mysteries and the first one of that series I've read. I received it as an ARC for reviewing DRACULAS. I absolutely loved the book, and it is one you can pick up and read without having to read the others. I read the non-linear version. 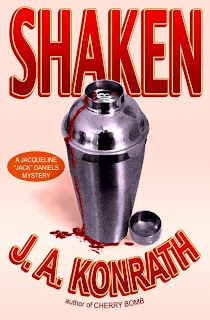 Since her debut in Whiskey Sour, Lieutenant Jacqueline “Jack” Daniels has dealt with her fair share of criminals. But she may have finally met her match in “Mr. K,” the brutal serial killer who has eluded Jack not once, but twice, over the years. Mr. K is the essence of evil, credited with more than two hundred horrific homicides. Now, on a hot August night, Jack finally gets the chance to face the maniac—unfortunately, she must do so while bound and gagged in a storage locker, primed to be his next victim. As she awaits her fate, Jack looks back on her career, from her first homicide case to her recent retirement. The twenty-five years in between saw Jack’s attitude toward justice, the law, her job, and her personal life shift drastically. She is a different woman now…but is she good enough to stop a madman? Novelist J. A. Konrath’s trademark blend of suspense and wry humor are on full display in this tense thriller, a gripping tale that will keep readers on the edge of their seats.
Review: As the seventh book in the Jack Daniels Mysteries, J.A. Konrath's SHAKEN kidnaps the reader into this suspenseful novel and doesn't let the reader go, even at the end. SHAKEN follows Jack Daniels' career attempts to capture the infamous Mr. K by interspersing three timelines throughout the novel, twenty-one years ago, three years ago, and present day. The philosophical notion of good and evil plays throughout the novel. "What is evil, if it even exists" is a question Jack has to answer, and she may have discovered it by the novel's end. The three timelines were easy to follow and brilliantly foreshadowed enough hints to what was going to happen to make the reader want to read as quickly as possible to discover what did happen. Konrath's writing heightened the tension and suspense, and he added bits of wit and humor throughout. SHAKEN is a fun, sad, gory, horrifyingly great read. You don't have to read the previous Jack Daniels' Mysteries to enjoy SHAKEN, but by reading SHAKEN, you'll want to rush out and read the previous ones. I know I do.
Posted by Cherie Reich at 8:30 AM