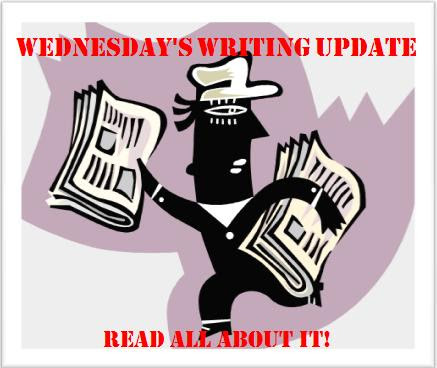 Wow! Yes, folks, a week has already flown by, and it's time for another Wednesday's Writing Update. I actually have updates today, but I can't say they're all good news.
Yesterday, I received my rejection for "Lady Death" from Rogue Blade Entertainment's Assassins anthology. The editor loved my opening, but he felt the story fell short in the end. He thought I should go back through it and explore the premise of assassinating Death. He said that the story would likely double in word count, if I did so. I have to say that I agree. I loved my beginning, too, but perhaps I rushed the rest of the story. I let the story and myself down. Next year, I plan to return to this story and make it the story it should be. Perhaps then it'll find a home.
Today, I received my rejection for "Melek Katili" from the More Scary Kisses anthology. It was a brief form rejection. I had sent them an email about my story submission yesterday, too, since I hadn't heard from them since I submitted through their online form. They hadn't received it, but then it was rejected. I'll have to find another place to send it. Does anyone know a place that accepts 2600-word paranormal romance stories? I really can't focus on sending it out right away, since I'm gearing up for NaNoWriMo, but it'd be nice to know of some other places.
I have written quite a bit this past week. I've written 3049 words, which isn't too bad. I finished writing my flash fiction for October. I wrote part one of the three part story I do on Raven and the Writing Desk with Lisa Rusczyk and Aubrie Dionne; it'll be on the blog Monday. I also went back to "They," a post-apocalyptic short story I originally planned to send to Pill Hill Press's 2013: The Aftermath anthology. I still might finish it up and send it. The deadline is November 5th. Perhaps I can get to it this weekend. *crosses fingers*
Then, I've been planning for NaNoWriMo. I writing this novel very differently from anything else I've written. I'm trying to go into it with all the research done. I've written blurbs, an outline, timeline, and a synopsis so far. I'm working on character sketches (including the flash fiction pieces for my blog), and I hope to do some world building sketches. Then, I do have some research, particularly concerning missing children and newspaper articles. Typically when I write a novel, I may have a brief outline, but then I run with it. If I don't know something, I look it up quickly on Google and then begin writing again, but I wanted to see how the more planned approach works for me. I'll keep you updated.
It looks like for the rest of October that I'll be planning my NaNoWriMo novel and perhaps finishing up "They." I still have four submissions out there (one in revisions, two short listed, and one contest entry). I need to submit more, but I want to go back through my old short stories and do some edits/revisions on them before I send them back out. It'll have to wait until after November and most likely until sometime next year, since I have a short story to write in December and revisions/research/edits to do on Virtuoso.
I tell you...a writer's work is never done.
But, that's okay. I'm willing to do the work.
Now, off to work on more character sketches. Yay! Not really. *grins*
Posted by Cherie Reich at 10:27 AM

I'm surprised those stories were rejected because they are really well written. Oh well.

Where are you going to send them next?

Good luck finding homes for your stories! You're such a busy bee.

I'm not sure where I'll send them next, Aubrie. I'll likely start looking for new places come December.